Back to all news

Belarus native Andrey Sokurec views his story as fitting the mold of the American dream. He progressed from sweeping floors for a construction company to becoming the founder and CEO of the home-buying business Homestead Road.

“I’m just one of a lot of immigrants who get lucky to get the green card,” Sokurec said. “When I moved, I didn’t have any money and could hardly speak English. I’m still learning it, but it didn’t stop me from learning and building a business.”

While his brother had studied at the University of St. Thomas, he did not know anyone else in the United States, he said.

“America is the best country, I believe, to realize the opportunity, and a lot of people want to be here,” said Sokurec, a Golden Valley resident whose company is based in St. Louis Park. “A lot of people who live in America don’t realize that. It’s a privilege to live in this country.”

Although he had earned a degree in finance, banking and business law in Belarus, he began working as a pizza delivery driver and in construction.

“Just imagine how bad a construction worker I was,” he joked, given his previous experience in banking. “I don’t know how to swing the hammer right, so the only job available was for me was sweeping floors.”

He sought to work hard and traveled to the library to read every book he could find about how to succeed in business. For example, he was influenced by Minnesota businessman Harvey Mackay’s book “Swim with the Sharks Without Being Eaten Alive.”

“That’s really changed the way I think and shaped my future,” Sokurec said. “I found great mentors. I really appreciate what they did for me.”

As part of his research, he learned about customer service from Las Vegas-based shoe company Zappos through its Inside Zappos service and studied the business techniques of such name-brand companies as Nordstrom and Amazon.

Sokurec said that if a company can share great customer service, “The world will be a better place.”

He said he has tried to be an entrepreneur since he was about 12, leading small businesses in Belarus. He entered the corporate world as a commercial loan underwriter for a bank based in Russia. Throughout his career, he has been an avid reader about the cultures of successful companies.

He founded Homestead Road about 10 years ago, about five years after moving to the United States. The company buys homes from people in as-is condition and fixes them up.

“Our typical customer is like a 45-plus person who has a parent’s house to sell, and they want to do it easy and stress-free, because selling a house is very stressful, but selling your parent’s home is even worse,” Sokurec said. “So, a lot of people don’t want the stress of all the showings, Realtors and repairs.”

His company’s trademarked slogan is “Feel the joy.”

“What it means that when people work with us, they will have an experience,” he said.

They can even leave dirty dishes in the sink, he said, and his company will work with groups like the Salvation Army to donate furniture and other household items to people in need.

Because people often have an emotional attachment to the homes, Homestead Road invites clients to gather with neighbors and family members to bid a final goodbye to the house. The company provides them with a watercolor picture of the house that echoes some of their memories of the house.

“Their best memories might be a door in the basement that mom, as a measurement, might use for kids and grandkids,” Sokurec said.

He had the idea after clients asked if they could return to their former homes to take pictures, even if the houses had already been transformed with a different color paint or other changes.

“There’s still so many emotions that people had while they were living in that house,” he said.

The idea of providing the paintings came while searching for a company logo. Through an online search, company leaders learned about a woman who painted her mother’s house in watercolors after residents of three small Massachusetts towns were displaced by a reservoir.

“She wanted to create those memories, so she started painting those homes in watercolor,” Sokurec said. “We contacted her, and she told the story, and we bought the painting from her. It became our logo.”

Since the company is in the business of rehabilitating structures, the company decided to make a move for its own headquarters from the Parkdales office complex at the West End in St. Louis Park to two renovated floors of a four-story building at 4820 Minnetonka Blvd. After about a year of work, the project is slated to be complete next month.

The company continues to grow, with expansion to Milwaukee planned and about $32 million in revenue last year. The company made the Inc. 5000 list of the fastest-growing businesses in the country.

“My business philosophy is you have to empower people and have a self-managed business where people take ownership for the results but people have freedom to do it,” Sokurec said. “Our plan is to become a household name in 10 years for people who want to sell houses. … It’s a big, audacious goal, but it’s kind of exciting.”

He and other office staff members occasionally still lend a hand with the house projects.

While Sokurec grew up in a small condominium instead of a standalone house in Belarus, he hasn’t forgotten where he came from, and he retains a picture of his former complex.

“It’s still emotional,” he said of the building in his small town. “I grew up there.”

He praised his new country effusively.

“I love the people,” he said. “I love the core values people have here, and compared to other countries, it’s super easy to do business.”

Sokurec advised, “The only person who can stop you from achieving anything is yourself. If you have determination, any person can achieve any dream in America.”

Discover What Your
House Sells For “As Is”
×
×

We invite you to check out our new Feel the Joy Magazine, a Homestead Road publication created to share helpful, inspiring and fun content to our community of friends. This magazine publishes quarterly and features a variety of content intended to bring you and your family health and happiness.

Already subscribed? You can unsubscribe by clicking on the link 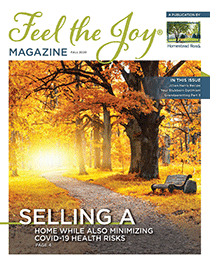 As we strive to get better, we would appreciate if you could let us know how we did based on your recent website visit.
The survey is just six questions and should take less than 2 minutes.

Questions with a red asterisk* are required to complete and submit survey.
We appreciate your feedback!

We would love your opinion